As most of you know, I'm very big on tricks. I think they are one of the best ways to teach a dog to learn and have fun at the same time. Even young puppies can learn tricks.
Last month I learned new things about teaching tricks at a two-day dog training seminar. In fact, the whole weekend was about tricks. It was so much fun to see all kinds of dogs learning and performing at the same time.
Once a dog has learned how to retrieve, he or she is capable of learning all kinds of fetching tricks. When Bonnie was young we played fetch with a ball. Later she played fetch with toys. We played it often and before long, it became a very special game to Bonnie.
Next, I taught her to pick up a bucket by holding the handle in her mouth. It was the first thing that tasted different than a ball or a toy. From there, I was able to teach Bonnie to carry the bucket. Later she picked up towels and brought them to me. I always rewarded Bonnie when she brought things to me. Now she brings me the remote control, the telephone, and my slippers. To Bonnie, this is a fantastic game. To me, it's fun and useful. I can tell her to help me by bringing me things.
So next, I taught Bonnie to retrieve a tissue. 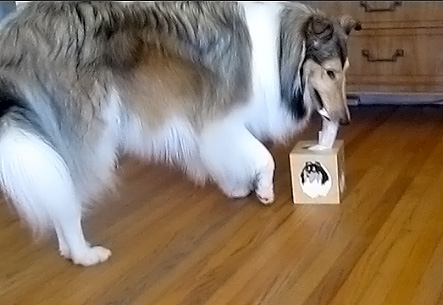 A tissue tastes very different than anything else she has put in her mouth. Because I had rewarded Bonnie for giving me the items instead of spitting them out or chewing on them, she quickly learned to grab the tissue and give it to me. The trick was easy because of all the other things Bonnie had learned to retrieve. Now I can ask Bonnie to give my house guest a tissue. It's a great trick and it makes people laugh. And if they sneeze, she can help them with that, too! Check out her video below.
Watch Bonnie's 'Tissue' Video!
For new readers and repeat readers:
Click here to read Bonnie's Blog
from the very beginning!
Tell a friend about this blog
and How to Love Your Dog

Back to: How to Love Your Dog

There are no comments to this entry.
Bravenet Blog
Get One For Free!
powered by